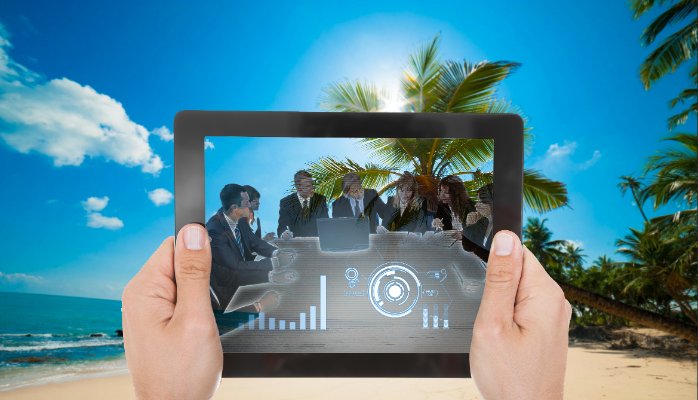 Imagine sitting on the beach surrounded by Hawaiian palms, your toes in the Pacific Ocean, and your colleague from the mainland invites you into the board room for a meeting. All you need is your tablet or mobile phone, outfitted with Augmented Reality (AR) technology, and you are there, able to see the presentation slides, 3-D models, and your colleagues faces.

The recent advancements in AR are inching us closer to this scenario. The CEO of Meta, Meron Gribetz, creator of the AR headset, calls Augmented Reality “the Hawaii-fication of work.” “You could sit on a beach and do all your work from there in a very natural way” Gribetz says.

Mahalo Digital is excited about the opportunities that come with the rise of the “new” virtual and augmented realities, and not just because of our obvious Hawaii obsession.

The terms Augmented Reality and Virtual Reality (VR) have been around for decades, but the applications are now coming to the forefront of the digital landscape.  AR is first thought to have been mentioned in 1901 when L. Frank Baum described a set of electronic glasses in his novel “The Master Key: An Electrical Fairy Tale.” The term itself was coined in 1990 by Boeing researcher Tom Caudell, and entered the mainstream in 2013 with the beta test of Google’s augmented reality glasses, Google Glass.

The more well known Virtual Reality (VR) has been a force in the video-gaming industry since the 1990s, and has its roots in science fiction of the 1930s.

VR and AR technologies differ in that virtual reality replaces the real world with a simulated one by virtually transporting and immersing the user into another world. By contrast, augmented reality functions by enhancing one’s current perception of reality by blending the real-world environment with virtual objects that are perfectly inserted into the user’s field of view.

As the new realities gain momentum in industries from entertainment to education, Mahalo Digital sees the unexplored possibilities that AR and VR can bring to our technology clients.

We are excited by the prospect of innovating for our clients using a medium most have never seen before. We could not have predicted ten years ago that we’d be working with these realities, and it is this element of novelty that keeps our work fresh and interesting. The ability to push the envelope of creativity on new fronts is truly why we love being the digital space.

The beauty of AR is that, unlike VR, it doesn’t block out what is happening in the “real” world, but rather has the distinct ability to forge relationships between people and communities.

Brian Calder, UX designer, and James True, developer, recently created an AR app for a Mahalo client technology trade show. Having worked with both AR and VR technologies, they see definite upside to the former.

“AR provides more opportunity to really enhance things that we already see and engage with every day, and brings the digital world into the world we already relate to,” says Calder.

True adds, “Mahalo looks for ways to touch the audience.” And AR does just that. “AR does the exact opposite [of VR], because it creates an environment we can share, that we only have in common because we are sharing that technology.”

Mahaloan Rick Barsotti says, “We like how AR fits into what we stand for – engagement through authenticity.”

Gribetz’ creation of the Meta 2 AR headset was born out of the desire to extend the human experience. “Machines should bring our work back into the world,” Gribez said in his February 2016 TedTalk. “We can connect with each other and with our work much better if we can see each other’s faces and hands in 3-D.”

AR allows users to connect to their surroundings, whether in nature or in the board room, by allowing tools and technology to be an extension of our bodies, as opposed to creating barriers between them.

The relationships and experiences that could come from future applications of AR and VR are astounding. Imagine learning the specifics of Michael Phelps’ swim stroke from the webbed Olympian himself, through AR technology. Picture your dream closet of the future, the boon of building your perfect-fitting wardrobe without paying for shipping and returns.

James True says this reality is not far off. “A body suit made up of thousands of tiny markers could easily be used to create a real-time fashion app so you could physically see what clothes look like on you.”

Calder has used a travel app that allows the user to navigate through France on a limited vocabulary. The app allows you to read a French menu, for instance, by pointing your camera on the text, and superimposing the English translation, he says. This is one of many exciting and practical applications on the horizon.

True admits that even a Minority Report-like interface is a real possibility, allowing us to interface with computers using only markers on our fingertips.

As the opportunities for AR and VR continue to grow, Mahalo looks forward to helping our clients apply these technologies in innovative ways in order to meet the needs of their customers.